We hear alot about the kings so we have to give our queens a chance to get some shine too! Sungod64.
African Warrior Women

Matriarchal warrior tribes and matrilineal tribal descent are a continuing theme in African history and in some cases survived into modern times. One of the great African warrior queens of the ancient world was Majaji, who led the Lovedu tribe which was part of the Kushite Empire during the Kushite’s centuries long war with Rome. The empire ended in 350 AD when the Kushite stronghold of Meroe fell to repeated Roman assaults. Majaji led her warriors in battle armed with a shield and spear and is believed to have died on the walls of Meroe.

The Egyptian warrior queens, descended from the royal house of Kush, included Ahotep, the 7 Cleopatras and Arsinoe II & III. They ruled Egypt and led her army and navy through Roman times.

A succession of Ethiopian Queens and military leaders known as Candace were also descended from the Kush. The first Candace, leading an army mounted on war elephants, turned back Alexander’s invasion of Ethiopia in 332 BC. In 30 BC Candace Amanirenas defeated an invasion by Patronius, the Roman governor of Egypt and sacked the city of Cyrene.

In 937 AD Judith, Queen of the Falash, attacked Axum, sacred capital of Ethiopia killing all the inhabitants including the descendants of Solomon and the Queen of Sheba.

Centuries later Amina, daughter of Queen Turunku of the Songhai in mid-Niger ruled the Hausa empire from 1536 to 1573. She extended her nation’s boundaries to the Atlantic coast, founded cities and personally led her army of 20,000 soldiers into battle. 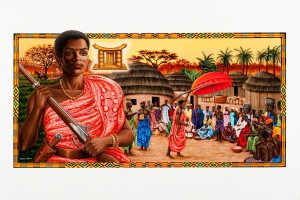 Mbande Zinga was the sister and advisor of the king of Ngola (today Angola) and served a his representative in negotiating treaties with the Portuguese. She became queen when her brother died in 1624 and appointed women, including her two sisters Kifunji and Mukumbu, to all government offices.

When the Portuguese broke the peace treaty she led her largely female army against them inflicting terrible casualties while also conquering nearby kingdoms in an attempt to build a strong enough confederation to drive the Portuguese out of Africa. She accepted a truce and then agreed to a peace treaty in 1635. She continued to rule her people and lived to be 81. When Angola became an independent nation in 1975 a street in Luanda was named in her honor.

Llinga, a warrior queen of the Congo armed with ax, bow and sword fought the Portuguese in 1640. Women warriors were common in the Congo where the Monomotapa confederacy had standing armies of women.

Kaipkire, warrior leader of the Herero tribe of southwest Africa in the 18th century led her people in battles against British slave traders. There are records of Herero women fighting German soldiers as late as 1919.

Nandi was the warrior mother of Shaka Zulu. She battled slave traders and trained her son to be a warrior. When he became King he established an all-female regiment which often fought in the front lines of his army.

Mantatisi, warrior queen of the baTlokwas in the early 1800s fought to preserve her tribal lands during the wars between Shaka Zulu and Matiwane. She succeeded in protecting the baTlokwas heritage although her son, who became King when she died, was eventually defeated by Mahweshwe.

Madame Yoko ruled and led the army of the fourteen tribes of the Kpa Mende Confederacy, the largest tribal group in 19th century Sierra Leone. At that time at least 15% of all the tribes in Sierra Leone were led by women, today approximately 9% have women rulers.

Menen Leben Amede was Empress of Ethopia. She commanded her own army and acted as regent for her son Ali Alulus. She was wounded and captured in a battle in 1847 but was ransomed by her son and continued to rule until 1853.

Seh-Dong-Hong-Beh, was a leader of the Dahomey Amazons under King Gezo. In 1851 she led an army of 6,000 women against the Egba fortress of Abeokuta. Because the Amazons were armed with spears, bows and swords while the Egba had European cannons only about 1,200 survived the extended battle. In 1892 King Behanzin of Dahomey (now Benin) was at war with the French colonists over trading rights. He led his army of 12,000 troops, including 2,000 Amazons into battle.

Despite the fact that the Dahomey army was armed only with rifles while the French had machine guns and cannons, the Amazons attacked when the French troops attempted a river crossing, inflicting heavy casualties. They engaged in hand to hand combat with the survivors eventually forcing the French army to retreat. Days later the French found a bridge, crossed the river and defeated the Dahomey army after fierce fighting. The Amazons burned fields, villages and cities rather than let them fall to the French but merely delayed Dahomey being absorbed as a French colony.

In the late 19th century Mukaya, the leader of the Luba people of central Africa whose nation stretched along the rain forest from Zaire to northern Zambia, led her warriors in battle against enemy tribes and rival factions. Initially she fought alongside her brother Kasongo Kalambo, after he was killed in battle she assumed sole control of the empire and the army.

Nehanda (1862-1898) was a priestess of the MaShona nation of Zimbabwe. She became a military leader of her people when the British invaded her country. She led a number of successful attacks on the English but was eventually captured and executed.

Taytu Betul (1850-1918) was Empress of Ethopia. During her 14 year reign she established and named the modern capital of Addis Ababa, she led troops in battle and negotiated peace treaties. She retired from public life after the death of her husband.

Yaa Asantewaa (1850-1921) the Queen Mother of one of the Asante states of Ghana led her army in continuous battles against the British until her capture.