Ok! I see alot of people want to right off what was created at this time(250 BCE) and make excuses for the tech without knowing a damn thing about the culture!I have said before that we are STILL 5 thousand years behind the tech for that time or era!We seem to think we are sooo tech savvy and smart but when you compare the eras and the tech at the time…we are still babies compared to the Ancients! 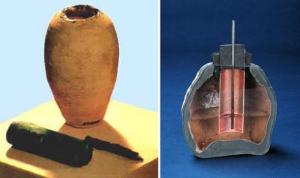 The first battery was made and applied/used effectively to the uses of the time and we still haven’t a clue why?!?My concern is that we will (like always)take someones word or explanation for it’s use and just leave it at that!We have to stop doing that and seek to get the REAL answers so we can make an informed opinion about what ever subject we need to. Great invention for it’s time. Sungod64

Sitting in the National Museum of Iraq is a earthenware jar about the size of a man’s fist. Its existence could require history books throughout the world to be rewritten.

According to most texts the “voltic pile,” or electric battery, was invented in 1800 by the Count Alassandro Volta. Volta had observed that when two dissimilar metal probes were placed against frog tissue, a weak electric current was generated. Volta discovered he could reproduce this current outside of living tissue by placing the metals in certain chemical solutions. For this, and his other work with electricity, we commemorate his name in the measurement of electric potential called the volt. 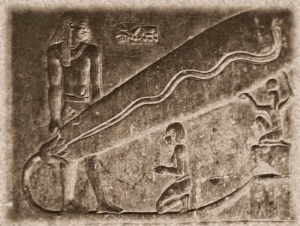 The little jar in Baghdad suggests that Volta didn’t invent the battery, but reinvented it. The jar was first described by German archaeologist Wilhelm Konig in 1938. It is unclear if Konig dug the object up himself or located it within the holdings of the museum, but it is known that it was found, with several others, at a place called Khujut Rabu, just outside Baghdad.

The jars are believed to be about 2,000 years old and consist of an earthenware shell, with a stopper composed of asphalt. Sticking through the top of the stopper is an iron rod. Inside the jar the rod is surrounded by a cylinder of copper. Konig thought these things looked like electric batteries and published a paper on the subject in 1940.

World War II prevented immediate follow-up on the jars, but after hostilities ceased, an American, Willard F. M. Gray of the General Electric High Voltage Laboratory in Pittsfield, Massachusetts, built some reproductions. When filled with an electrolyte like grape juice, the devices produced about two volts.

Not all scientists acce

pt the “electric battery” description for the jars. Some suggest that they were simply containers used to hold papyr

us scrolls. The scrolls have since rotted away leaving just the jars. If they were batteries, though, who made them and what were they used for?

Khujut Rabu was a settlement of a people called the Parthians. While the Parthians were excellent fighters, they had not been noted for their technological achievements and some reseachers have suggested they obtained the batteries from someone else. A few people have even suggested that this someone else was a space traveler that visited Earth during ancient times.

As romantic a notion as this is, there is nothing about the Baghdad batteries that is high-tech. All the materials used are common in origin and the manufacture was well within the ability of many of the peoples of that era. What is surprising about the jars is that somebody figured out how to put the right materials together in the right way to make a device that has a function which was not obvious. It is likely that the batteries (if that is what they are) the result of an isolated and accidental development.

What might they have been used for? German researcher Dr. Arne Eggebrecht used copies of the batteries to electroplate items (a feat recently duplicated on the show Discovery Channel show Mythbust 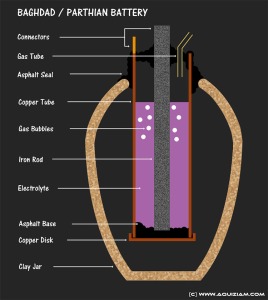 ers). The electroplating process uses a small electric current to put a thin layer of one metal (such as gold) on to the surface of another (such as silver). Eggebrecht suggests that many ancient items in museums that are thought to be gold may actually be gold-plated silver.

So are these devices batteries? It certainly is a strong possibility. Even if they are, Count Volta need not be worried. We are unlikely to change the term used for electrical potential at this late date. Don’t always believe what you see on Tell-a-Lie-Vision!