PLEASE DON’T BE FOOLED!The Indians before the 1800’s were 95% darkskinned!The euro influx began to murder the indians because they were the people they saw in their country that gave them civilization,they wanted to start their own legacy and were faced with the samething AGAIN in their homeland so killing indians was not a problem for them,t 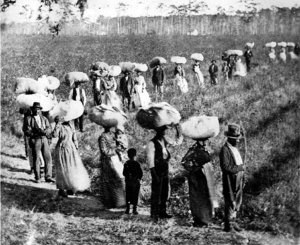 hey have been doing it for centuries  before.If the indian was not dark they would NOT have been killed off like they have been so far.The cleansing of the eastern coast was an act of desperation and evil intent.They wanted this land and did not want to bargain/share or barter for it.They knew what they had to do and did it.It was easy to do because t

hey were the same people they hated in their country of origin, so eliminating the enemy was normal for them. The euro people had a mission by the time 100 years past,they want to eliminate ALL local indigenous people completely,this information is just ONE account of the acts of genocide that was committed against the people of the Americas. Sungod64

Trail of Tears facts provide the information about tragic journey, history and story for Trail of Tears. The trail is measured around 1000 miles. There were Five Civilized Tribes of Creek, Choctaw, Cherokee, Chickasaw, and Seminole. All five tribes were forced to travel to reach the reservation which is now called as Oklahoma from their homeland, Deep South. Here are the complex facts about trail of Tears.

The Journey of Trail of Tears began in 1831 by removing the Choctaw tribe. In 1834, the Creek tribe was removed.  In 1837, it was the turn for the Chickasaw tribe to move. In 1838, the Cherokee tribe was moved.

The 5 civilized tribes had different political and cultural styles. They had to adopt the European culture and way of life by converting the religion into Christianity, using the similar European clothing, performing farming method and houses. A great figure of Indian people is seen in Pocahontas facts.

The tribes also had a public school, judiciary system and written constitution.  The wealthy members from the tribes live well because they often owned some black slaves working on the cotton plantation.

Trail Of Tears Facts 5: End Of The American Civil War

The American civil war last from 1861 to 1865.  It marked the fall of the Five Civilized Tribes.  A famous Indian woman can be seen in Sacagawea facts.

The main person who marked the Trail of Tears was President Andrew Jackson.  The decision of this man was to clean some Indian tribes.

In 1830, the Indian removal act was signed by President Andrew Jackson. It was used to reverse the right of respecting the Indian people in US. It was used by the government to move the Indian tribes from Deep South to Oklahoma reservation.

There were around 17,000 Cherokees who had to move from their land in 1838. They have to go to the Indian reservation across the trail of Tears.

Cherokees were grouped into several parts. A group consisted of 1000 people. Throughout the journey, they were only allowed to take 5,000 horses, 600 wagons and cars and 100 oxen.

Many people died along the journey in Trail of Tears. Many of them cannot resist to the cold weather because they did not have adequate clothing.  Some of them also suffered from disease, starvation and malnutrition.