1. The Kingdom of Kush 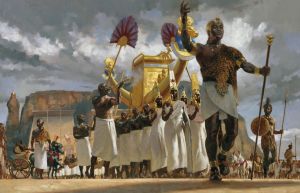 Though often overshadowed by its Egyptian neighbors to the north, the Kingdom of Kush stood as a regional power in Africa for over a thousand years. This ancient Nubian empire reached its peak in the second millennium B.C., when it ruled over a vast swath of territory along the Nile River in what is now Sudan. Almost all that is known about Kush comes from Egyptian sources, which indicate that it was an economic center that operated a lucrative market in ivory, incense, iron and especially gold. The kingdom was both a trading partner and a military rival of Egypt—it even ruled Egypt as the 25th Dynasty—and it adopted many of its neighbor’s customs. The Kushites worshipped some of the Egyptian gods, mummified their dead and built their own types of pyramids. The area surrounding the ancient Kushite capital of Meroe is now home to the ruins of over 200 pyramids—more than in all of Egypt.
2. The Land of Punt 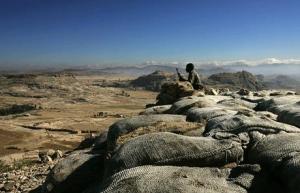 Few African civilizations are as mysterious as Punt. Historical accounts of the kingdom date to around 2500 B.C., when it appears in Egyptian records as a “Land of the Gods” rich in ebony, gold, myrrh and exotic animals such as apes and leopards. The Egyptians are known to have sent huge caravans and flotillas on trade missions to Punt—most notably during the 15th century B.C. reign of Queen Hatshepsut—yet they never identified where it was located. The site of the fabled kingdom is now a hotly debated topic among scholars. The Arabian Peninsula and the Levant have both been proposed as potential candidates, but most believe it existed somewhere on the Red Sea coast of East Africa. In 2010, a team of researchers tried to zero in on Punt by analyzing a mummified baboon that its rulers once gifted to the Egyptian pharaohs. While their results showed that the remains most closely matched animals found in modern day Ethiopia and Eritrea, the precise location of the Land of Punt has still yet to be confirmed.
3. Carthage Empire 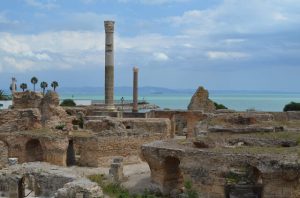 Best known as ancient Rome’s rival in the Punic Wars, Carthage was a North African commercial hub that flourished for over 500 years. The city-state began its life in the 8th or 9th century B.C. as a Phoenician settlement in what is now Tunisia, but it later grew into a sprawling seafaring empire that dominated trade in textiles, gold, silver and copper. At its peak, its capital city boasted nearly half a million inhabitants and included a protected harbor outfitted with docking bays for 220 ships. Carthage’s influence eventually extended from North Africa to Spain and parts of the Mediterranean, but its thirst for expansion led to increased friction with the burgeoning Roman Republic. Beginning in 264 B.C., the ancient superpowers clashed in the three bloody Punic Wars, the last of which ended in 146 B.C. with the near-total destruction of Carthage. Today, almost all that remains of the once-mighty empire is a series of ruins in the city of Tunis.
4. The Kingdom of Aksum 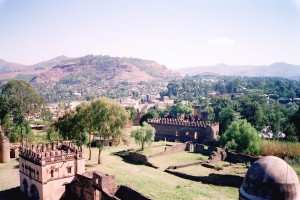 During the same period that the Roman Empire rose and fell, the influential Kingdom of Aksum held sway over parts of what are now Eritrea and northern Ethiopia. Surprisingly little is known about Aksum’s origins, but by the 2nd and 3rd centuries A.D. it was a trading juggernaut whose gold and ivory made it a vital link between ancient Europe and the Far East. The kingdom had a written script known as Ge’ez—one of the first to emerge in Africa—and it developed a distinctive architectural style that involved the building of massive stone obelisks, some of which stood over 100 feet tall. In the fourth century, Aksum became one of the first empires in the world to adopt Christianity, which led to a political and military alliance with the Byzantines. The empire later went into decline sometime around the 7th or 8th century, but its religious legacy still exists today in the form of the Ethiopian Orthodox Church.
5. The Mali Empire 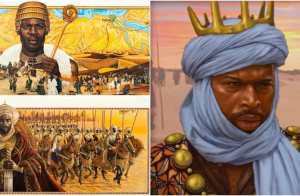 The founding of the Mali Empire dates to the 1200s, when a ruler named Sundiata Keita—sometimes called the “Lion King”—led a revolt against a Sosso king and united his subjects into a new state. Under Keita and his successors, the empire tightened its grip over a large portion of West Africa and grew rich on trade. Its most important cities were Djenné and Timbuktu, both of which were renowned for their elaborate adobe mosques and Islamic schools. One such institution, Timbuktu’s Sankore University, included a library with an estimated 700,000 manuscripts. The Mali Empire eventually disintegrated in the 16th century, but at its peak it was one of the jewels of the African continent and was known the world over for its wealth and luxury. One legendary tale about the kingdom’s riches concerns the ruler Mansa Musa, who made a stopover in Egypt during a 14th century pilgrimage to Mecca. According to contemporary sources, Musa dished out so much gold during the visit that he caused its value to plummet in Egyptian markets for several years.
6. The Songhai Empire 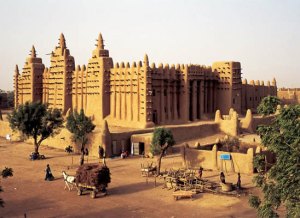 For sheer size, few states in African history can compare to the Songhai Empire. Formed in the 15th century from some of the former regions of the Mali Empire, this West African kingdom was larger than Western Europe and comprised parts of a dozen modern day nations. The empire enjoyed a period of prosperity thanks to vigorous trade policies and a sophisticated bureaucratic system that separated its vast holdings into different provinces, each ruled by its own governor. It reached its zenith in the early 16th century under the rule of the devout King Muhammad I Askia, who conquered new lands, forged an alliance with Egypt’s Muslim Caliph and established hundreds of Islamic schools in Timbuktu. While the Songhai Empire was once among the most powerful states in the world, it later crumbled in the late 1500s after a period of civil war and internal strife left it open to an invasion by the Sultan of Morocco.
7. The Great Zimbabwe 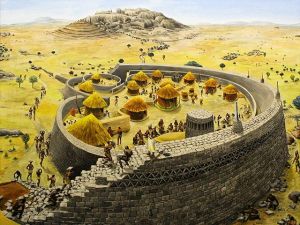 One of the most impressive monuments in sub-Saharan Africa is the Great Zimbabwe, an imposing collection of stacked boulders, stone towers and defensive walls assembled from cut granite blocks. The rock citadel has long been the subject of myths and legends—it was once thought to be the residence of the Biblical Queen of Sheba—but historians now know it as the capital city of an indigenous empire that thrived in the region between the 13th and 15th centuries. This kingdom ruled over a large chunk of modern day Botswana, Zimbabwe and Mozambique. It was particularly rich in cattle and precious metals, and stood astride a trade route that connected the region’s gold fields with ports on the Indian Ocean coast. Though little is known about its history, the remains of artifacts such as Chinese pottery, Arabian glass and European textiles indicate that it was once a well-connected mercantile center. The fortress city at the Great Zimbabwe was mysteriously abandoned sometime in the 15th century after the kingdom went into decline, but in its heyday it was home to an estimated 20,000 people.

The Kingdom of Ghana 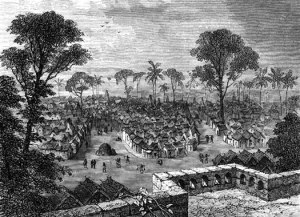 Spread across parts of what is now Mauritania, Senegal, and Mali

More commonly known as Wagadu, this kingdom was an important stop along the trans-Saharan trade route which connected African societies in the Sahel to the markets found along the coastlines of the Mediterranean Sea and the trans-Saharan gold trade. Although its capital city was said to have changed several times, one of these, Koumbi Saleh, was the biggest city south of the Sahara Desert. At its peak, it was home to between 15,000 and 20,000 people – a phenomenal population for a city which had a limited water supply. They specialized in the trade of gold and kola nuts (the latter of which became the secret ingredient in Coca-Cola centuries later). The Kingdom of Ghana’s decline was cemented when it became part of the kingdom of Mali around the year 1240 CE. 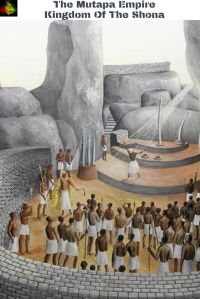 Spread across parts of what is now Lesotho, Mozambique, South Africa, Swaziland, Zambia, and Zimbabwe

The Mutapa Empire encompassed a truly staggering portion of Southern Africa, from the Limpopo and Zambezi Rivers to the Indian Ocean coastline. Its territory was so large that if it were around today, it would stretch across parts of six Southern African nations. Legend has it, a warrior prince from the Kingdom of Zimbabwe established the Kingdom of Mutapa. Within a generation, Mutapa eclipsed the glory that was Great Zimbabwe and its surrounds. The Portuguese unwittingly became middlemen between India and the Mutapa’s smaller kingdoms in their bid to control trade in the region (which was also fueled by rumours that the biblical mines of King Solomon were held by the ruler of Mutapa). The Kingdom of Mutapa wielded such power, they acquired a subsidy from every captain who took office in Portuguese Mozambique and they imposed a 50% tax levy on all trade goods imported. Sadly, the kingdom’s decline began in the early 17th century due to factional in-fighting which gave the Portuguese an opportunity to make Mutapa a vassal state. 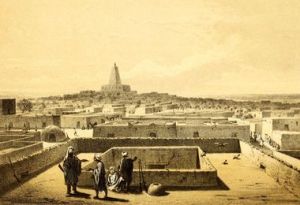 Found in modern-day Nigeria, the Benin Empire was considered one of the oldest and most developed states in West Africa until its annexation by the British Empire. Famous artisans crafted masterpieces from ivory, bronze and iron. The Benin Empire had a strong trading relationship with the Portuguese, exchanging palm oil, pepper, and ivory for Manilla (a form of currency used in West Africa) and firearms. The relationship even saw an ambassador visit Lisbon in the 16th century. Britain’s first expedition to Benin occurred in 1553 and a mutually beneficial trading relationship existed throughout the 16th and 17th centuries until Benin suspected Britain of making controlling advancements. Dutch, British and Portuguese explorers brought numerous tales back to Europe of the beauty, wealth and sophistication of Benin. 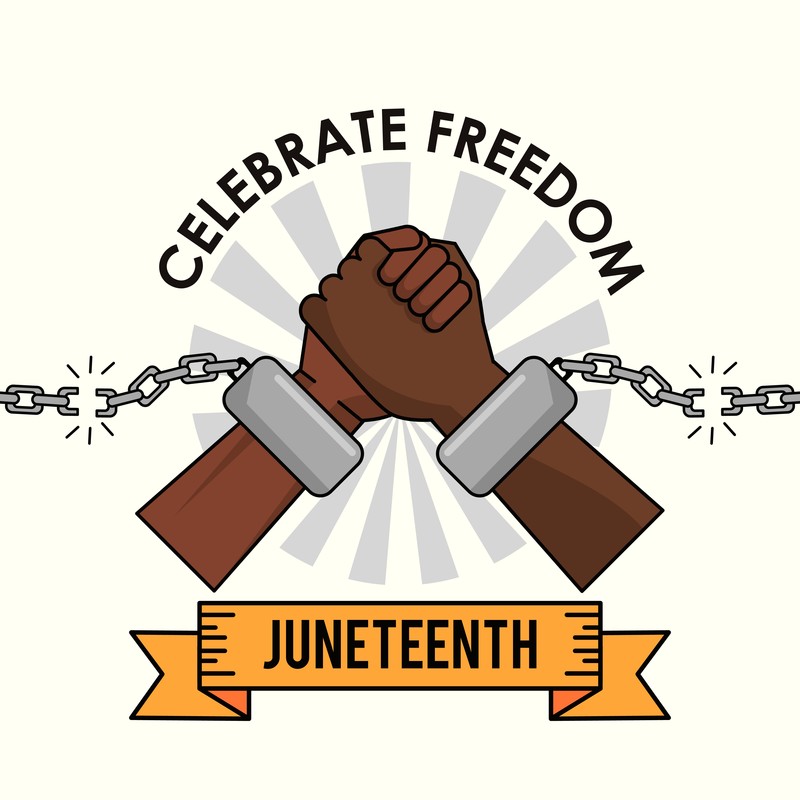 When did Juneteenth become a national holiday? Black People Stand up!!!!!! Juneteenth is an annual observance on June 19 to remember when Union soldiers enforced the Emancipation Proclamation and freed all remaining slaves in Texas on June 19, 1865. This day is an opportunity for people to celebrate freedom and equal rights in the United […]